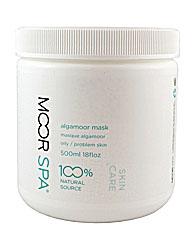 Algamoor is a unique 10,000 year old deposit, nearly 50 feet thick, which is extracted from a lake bed in Northern Germany. The Algamoor was formed in a very similar way to Moor mud but is composed entirely of algae instead of plant matter. Algamoor is used by many hospitals and clinics in Northern Germany for applications in dermatology, gynaecology, rheumatology as well as cosmetic and sports injuries. There are 12 species of algae present within the Algamoor and it is also rich in minerals including: magnesium, calcium, manganese, iron, silicon, sulphur and aluminum. The Algamoor has a range of therapeutic benefits similar to, but less potent than the Austrian Moor. However, its main feature is that it is deeply hydrating and is remarkably easy to remove both from the body and from towels. Also, unlike seaweed or other algae, the Algamoor has relatively no smell.

No reviews, be the first to add one.